When we moved to Weatherford, more than a year ago, I knew there would have to be changes in the way I work.  We are in the country and get our water from a well.  A few weeks ago, I mixed glazes for the first time since we moved and I used distilled water because that’s what the experts recommend and I was not sure how the well water would affect my tried & true glazes.  Well… they all turned out AWFUL!

My husband is a mechanical engineer and I was a quality engineer for 32 years, so analysis is just what we do…about everything.  So, we began to analyze (I know you’re yawning now but it gets better).  We tested using all three kilns and every combination I could think of. Yesterday, I decided to study the recipes & see if I could come up with anything I might have done differently that would have caused these glazes to go so horribly wrong.  The worst glaze was my precious Pumpkin Matt, which I’ve been using for at least 15 years with great success.  So why did it turn out like dried mustard on a stick?  Hmmm…well, while studying the recipe card I noticed that the amounts listed for the 3 gallon batch were larger on some ingredients than for the 4 gallon batch.  Eureka!  Of course, that’s the problem.  So I re-mixed a batch and fired a test last night and it turned out beautiful!!!  Not just pretty, but yummy, yummy beeyewtiful!

So today I’m a happy potter!  And tomorrow and I will begin my quest anew to find the problem with each of the other glazes that just aren’t themselves.

By the way, here’s a picture of the new studio – my little piece of heaven on earth. 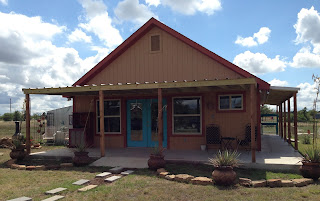