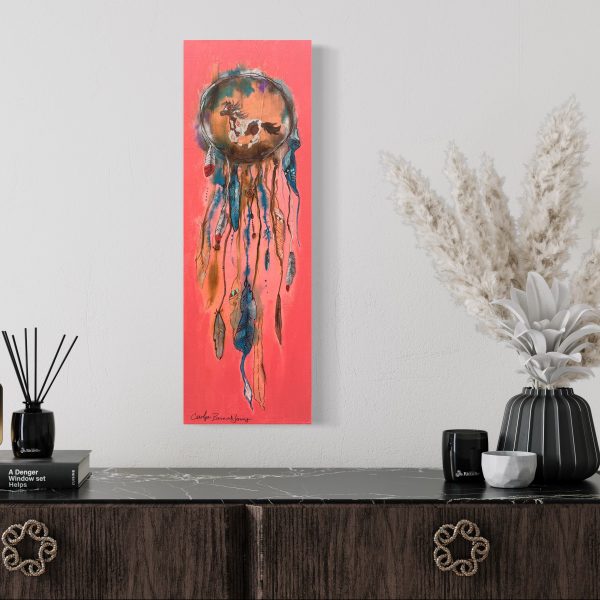 The word “Chahta” is from the ancestral language of the Choctaw Nation and was translated to English as Choctaw.

The Choctaw Indian Pony is a rare strain of colonial Spanish Mustang brought to the New World in 1540, by Hernando De Soto looking for the gold in the “Seven Cities of Cibolo”. Native Americans , never having seen a horse , referred to the mustangs as “Spirit Dogs” and the spirit dogs became a major part of the tribes ‘culture and spirituality’. The Spanish had a chain of missions across the Deep South and they introduced horses, cattle, goats, sheep and plantation based agriculture to this region. This diminutive Spanish pony became an integral part of the lives of Native American tribes Choctaw, Chickasaw, Creek, Seminole, and Cherokee of the Southeastern United States when they were left behind by the explorers on their 5400 mile journey in quest of riches.

The colorful ponies also played a part in the tragic American history known as “The Trail of Tears.” The beloved little horses were forced to carry their Native American families to their forced exile from their southeastern homes to the Oklahoma Territory following the passage of the Indian Removal Act of 1830. Later these ponies were ordered to be destroyed by the US Government. “The motivation was simple remove the Indian from his horse and they’d be easier to force onto the reservations. The military knew that Native warriors on their small horses comprised the finest light cavalry in the world. But this equicide wasn’t simply designed to clip the warrior’s wings; military men like Custer knew that the horse was as much a spiritual part of Native culture as the land itself. Taking away the horses was an attempt to break the people’s spirit. All across the West, Native American horses were rounded up and slaughtered as –Custer had orchestrated on the Washita River-or their herd stallions exterminated and replaced by studs from larger breeds. The military men were blinded by the fact that the “squaw ponies” used by the Native American people carried some of the bloodlines of Spain’s most regal bloodlines.”

A sacred few of these equine treasures were hidden from execution and preserved for decades by Choctaw and White families in the Southwest. Then, into Oklahoma, drove a young cowboy named Gilbert. H. Jones. He had a life-long passion for pure Spanish Mustangs (now more accurately called Colonial Spanish Horses) the rare breed to which all Indian Pony strains belong. Jones was so impressed by the remarkable abilities of the hardy breed that he dedicated the rest of his life preserving them. His brand G-J is found on some of the Choctaw Ponies at the Black Hills Wild Horse Sanctuary.

The Choctaw Nation along with Gilbert Jones, Bryant Rickman and a host of others can be praised for helping to save the endangered bloodlines of the Choctaw Ponies they have preserved. Traits of the Choctaw Ponies are short, strong backs, mild temperaments, rather light in build, highly intelligent, hearty and surefooted with good legs.

There are no reviews yet.